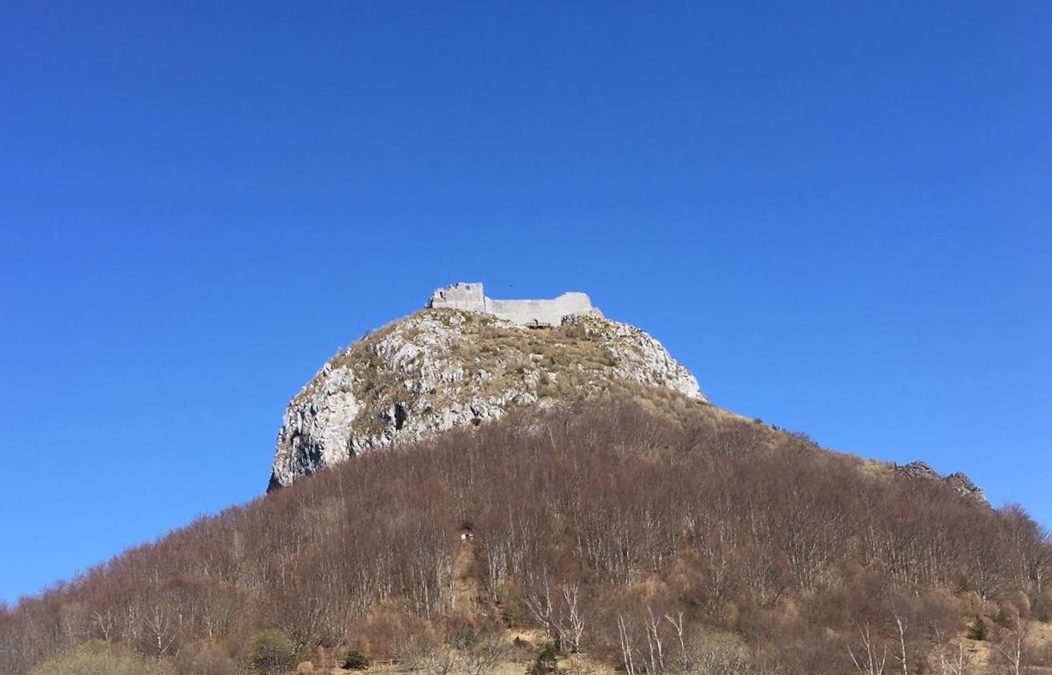 We stood in a circle holding hands. Our hands linking the heart-energy flowing between us. We all knew why we were there. Nine of us the first time, thirteen a week later. Eyes closed we invited the angels to begin the process. As we each opened our hearts and minds to the Divine Healing , we created a column of brilliant Light flowing down from the Heavenly realms and deep into the ground of Montségur.

I have been wanting to return to the Languedoc region of France since my husband Brian bought me a birthday weekend in Carcassonne in March a few years ago. I’d read The Labyrinth by Kate Mosse, on retreat in Crete, which resonated so strongly with me that I felt I had history there. I knew there was some healing work to be done. I also knew that there would be others in my ‘tribe’ who were also called by the angels to bring healing to the past.

On the recommendation of a couple of friends, I booked and organised a few days in some fabulous Gites called Maison de la Roche, in Ferrals-les-Corbieres . I booked my flights, and just by putting out the suggestion to some lovely friends on Facebook that they might like to come along for a few days and share the experience. To my surprise (though I don’t know why) it filled immediately and I had a full house. More wanted to come. So I divided the group into two separate groups, with 9 arriving first, and 12 to follow. (I’m sure you won’t have missed the significance of these special numbers). How exciting that we arrived on the Spring Equinox, and a powerful full moon. And what magical powerful energy that invoked!

Each group followed the same itinerary. We drove down to Sainte Marie de Mer on our first day to find the beach where the three Marys (Mary Salome, Mary Jacobi and Mary Magdalene) had landed after fleeing from Jerusalem following the crucifixion of Jesus. Here we find lots of fascinating examples of the eradication of Mary Magdalene’s presence from the ‘Church’ as we check out the artefacts in the Church of the ‘two’ Marys there. A beautiful beach, but was this actually the landing site of Mary Magdalene? Some of our group felt the energies there, others didn’t. We drove over to Aigues-Mortes (meaning dead water) where it is possibly more likely that the boat landed. There are historical pointers to Mary Magdalene having lived in the area until her death. But later on our visit to Rennes le Chateaux the mystery certainly thickens. Some of the secrets and symbolism is pointed out in the weird and wonderful church designed and built by Bérenger Saunière and revealed to us by our Guide, Fred Fons, who’s lived in that village and researched the secrets for years.

I’m fascinated by all the “Mary Magdalene and Holy Grail” theories, especially having taken groups to Magdala on retreats to the Holy Land – but my main pull was to visit the areas of the Cathars. The  deeply religious people from the area who were all executed as heretics during the Albegensian Crusade in the 13th century. Their history is fascinating to me as a student of world faiths and I’m interested in the link between their spirituality and the Essenes. (Could these teachings of peaceful living have been brought to France by Mary Magdalene?)

There were two main areas of healing I had been drawn to. The first was Montsegur which was the last stand of the remaining Cathars. We all climbed the steep path to the ruins of the stronghold where over 200 people, called ‘Parfaits’ (perfects) were rounded up and sent into a bonfire, on 16th March 1244. The Crusaders wrote that the entire group of families walked into the fire chanting hymns.

Here we were in March again, unconsciously, just because I had some time in March I had set up this amazing synchronicity. At the top of the mount we stood in the ruins of the Castle and held hands in a circle. Nine of us, (3 x 3 the most powerful magical and spiritual number) opened our hearts, calling in the angels we created a column of Light, and sent healing into the Land there. We then repeated a Celtic prayer together calling in Divine Light,  Love and Peace to all directions. Very moved by the experienced, we all climbed down again, cheering on those who were finding the climb back down a little tricky. It was a fabulous day, and a phenomenal experience to share.

The second intention was to return to Carcassonne, the walled cité. I’d spontaneously walked the perimeter before anchoring Divine Light as I walked around, asking that I be used as a channel of Healing Love and sending healing through my body into the ground.

The first time there I had a profound spiritual experience when Brian and I walked back into the walled cité through a different gate from the main entrance. As we walked in through a gated tower I’d had a dreadful sensation. I could only describe it as knowing that something terrible had happened there.  Even though I was filled with a sense of dread and foreboding and every cell in my body wanted to run I asked Brian to walk on and wait as I went back in to try to clear whatever it was that i’d felt.I felt freezing cold and shuddered from head to toe but stayed as long as I could, knowing this was something I needed to do. Reciting the Lord’s prayer three times, calling in Archangel Michael,  and then offering myself as a channel for Divine Light I called upon the Holy Spirit and all the angels to help me. When I came out of the tower gate Brian came over to me and said: “I’ve no idea what you were doing in there, but just before you came out three white doves flew out of the roof.” I didn’t find out what that tower was, until this recent visit.

When the first group arrived in Carcassonne,  Fred described how the Cathars had been subject to the Inquisition, in the Tower of Inquisition, tortured in an attempt to force them to renounce their own faith and turn to Catholicism. They were then tried in the Tower of Justice, found guilty of heresy, thrown into a prison (without windows), which was built between the two towers nicknamed ‘The Wall’ . They were without water, air, or food (men, women and children) and then they were taken out and burnt at the stake. The Wall itself no longer exists, but the two towers do. Fred hadn’t taken this group to the actual area, but gave us the history of Carcassonne in the centre square and then left us for the day to enjoy our wanderings. Before eating and splitting up to explore the group agreed they wanted to walk around the perimeter with me. Time after time our way was blocked. Either by repair works, or barriers. We walked around as much of it as possible. Then to find a way to do our ‘work’ we felt drawn to sit on a couple of benches and  silently send healing towards those areas we hadn’t been able to pass through. Then tenaciously trying one last time to find the right spot I led us all to some stairs down to an area where we could all stand together and again silently give Divine Light and healing towards the towers. Everyone picked up a heavy resistance, and one saw an angry, curled, huge black dragon guarding the place, in her mind’s eye.

On the second visit I was able to ask Fred to take us to the exact point in the perimeter where the two towers and ‘The Wall’ had been. Can you imagine the feeling when I was shown to the exact point where our first group had actually been drawn to, and were standing. We repeated the whole exercise, and this time I was inspired to ask us all to pray aloud together. (Next time we’ll chant as well).

For me I can’t possibly describe how much this trip has affirmed my work. Not least because my mother and my father separately spent their lives doing this too. My father was a great healer, who coincidentally passed on my birthday, the day of our second visit, and my mother did healing work all over the world. On some level I sense that I have been passed the baton. But I can tell you that we are all, as a group, still processing it into April, and probably beyond!

We had a wonderful time. I enjoyed my birthday dinner. We laughed, we were so well looked after by our hostess, at Maison de la Roche, and on other evenings we sampled fabulous wines from the area and ate some gorgeous food at a Michelin star restaurant. But most of all we made or deepened supportive friendships for life, and we are all determined to return in future years to do it again.

( So many of us do this ‘Light Work’ all over the world. Many without even realising it. I would love to hear your comments and shared experiences of healing in this way.)