Fifteen years ago when I first started running Angel Workshops of my own, in East London, I was fascinated by what I saw as a golden thread of truth weaving between all four of the main religions – Christianity, Judaism, Islam and Buddhism – of pure unconditional love – and the appearance of divine messengers, acting as a conduit for our prayers and aspirations, which we call ‘angels’. Inspired by my desire to understand more of the connection to angels and faith of my often multicultural audiences I wanted to find out more. I asked for Divine guidance and was led towards university (as a mature student) where I was then able to study as many world religions as I could during my degree course. As well as motivating me towards personal higher education it also inspired my first two books. 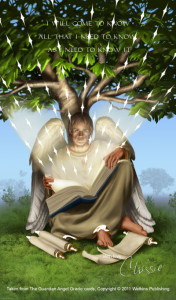 ant that we recognise that ‘angels’ are not restricted to any one particular religion. Even though angels make dramatic appearances and are mentioned over 300 times in the Bible, angels are not restricted to Judaism or Christianity. Belief in ‘celestial presence’ is embedded in history as far back as humanity itself. You only have to visit the British Museum to find Persian carvings of angels from before 4000 B.C.  Many sacred and religious scripts from all over the world  refer to spiritual beings, which we have come to know as ‘angels’, acting as messengers between humans and God. Whatever the cultural or religious belief, we have been given a Divine gift, a ‘go-between’, for us to call upon, to deepen our connection with God.

More recently, ancient documents containing prayers to angels, written in Aramaic, were found among the Dead Sea Scrolls. They had been written on parchments made from goat skins, by a group called ‘Essenes’ and hidden in pottery jars in the caves near the Dead Sea in a place called Qumran. These ancient documents gave  practical instructions  for healthy community living, teachings of great spiritual wisdom, and more than that they showed a profound belief in angels in relationship with the natural elements and the powerful forces of  mother nature as well as divine attributes.

It really doesn’t matter how you believe in angels. Whether you see, feel, hear them or simply just know they are there you can call upon them to help you through some of the tough times, as well as work with them in service to others. Working with the energy of angels can be truly life changing!

As you may know, I write regularly for Spirit & Destiny, Britain’s best-loved spiritual lifestyle magazine. I am delighted to announce that I have teamed up with them to offer a series of Angel Discovery Days around the UK next year. Following on from the weekend in Cardiff at the end of January, we have now added dates in Birmingham, London, Manchester and Glasgow. All the details are on the website: www.AngelLight.co.uk/discovery

The workshop is suitable for anyone who wishes to explore or develop their spiritual connections. Whether you are new to working with angels or have an established spiritual practice, I’d love to help you grow further. Together we will share practical tools and spiritual practices that will ground us, connect with universal energies, and attune with the angels on our personal journey. Come along and nurture your Body, Heart & Soul at these wonderful spiritual workshops, full of self-discovery, inspiring exercises and guided meditations in a beautiful safe and sacred space.

I’m offering these workshops at a reduced price of just £45 (half price) which includes refreshments and some very special gifts for everyone who attends. If you feel called to explore your spiritual impulse, book a place now with a £10 deposit: www.AngelLight.co.uk/discovery