I’ve always been intrigued by the wonder and mystery of life. Not least by the significant beautiful patterns running through our world. Look at the significant magic we associate with the number 7. Seven days of the week, seven continents, seven wonders of the world, seven colours of the rainbow, and I’m sure you can think of more links to the number 7 (even the old film Seven Brides for Seven Brothers). My interest is based on the Seven magnificent Archangels of creation and I’ve just been revisiting the teachings of the Seven Rays. These were channelled from the Ascended Masters by Alice Bailey and the Theosophists at the turn of the twentieth century and have held a great influence on the New Age movement of recent years. 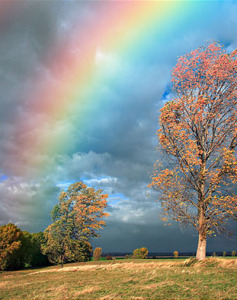 The seven colours of the rainbow hold more power than you could ever imagine. Each of the Seven Rays relates to a particular Divine aspect of creation, and is linked with one of the Ascended Masters, an Archangel and one of the most highly evolved beings which we can only describe as an aspect of God, called an Elohim. There is a belief that each of us has a soul connection with one of these Rays, and its energy force. As we work with (and through) the life lessons associated with the characteristics and spiritual qualities, so we develop personally and spiritually – working our way towards ascension.

Whether we understand the implications or not, the colours shining from the rainbow in our skies represents such a powerful energy force that it is almost impossible not to feel uplifted. Even people who don’t relate it to God or the angels in any way seem to love rainbows.

There are, as we know, as many angels in heaven as there are humans on Earth – but I believe that there are Seven Mighty Archangels representing the most potent forces in the spiritual world. They are, of course, all powerful beings, but it helps to associate each of them with just one or two qualities – higher vibrational energies such as protection, truth, healing and love. For some years now I’ve been guided to encourage people to work with these beneficent beings and learn more about our connections with the angels. I wonder which Archangel you are working with?

So many of us are being called to work with these energies. The angels have always been with us, guiding and enhancing our lives that we may take up our original intention and do our bit to serve the world!

I’m always intrigued by synchronicity, a beautiful double rainbow appeared in the sky and I was guided at the same time to teach the ‘Seven Steps to Spiritual Empowerment’ in order that I may help others to deepen their understanding as we all travel the spiritual highway together.