The Dignity of Women

In my work I hear countless complaints from people who believe they are being dealt a tough hand, as I’m sure you do too. I hear tales of how unfair or unjust life has been, and that all their problems have causes beyond their control. Yet actually, it isn’t true, is it? There’s been so much written and taught about ‘mind over matter’ for thousands of years and even science is coming round to proving that it is our thoughts, the mind itself, that is the culprit. If we have negative, or unhappy thoughts, we become unbalanced. And when the mind, body, and spirit are not in balance we become sick.

It’s not that difficult to work it out that we need to believe we can change. We just have to have faith in god, or the angels, or the therapist and then change our thinking.  It is we, ourselves, who are unfair. We are asking for healing, then not believing it to be possible. Perhaps we want to believe it, but after all there are mitigating circumstances why it is unlikely – aren’t there?  Nope. Only the story we tell ourselves. We can all seek a miracle worker – but actually I do believe we heal ourselves when pointed in the right direction. We can heal. If we believe we can. There’s nothing new in this it is as ancient as the hills. I love it when someone heals because they know they will, and occasionally I’ll witness a ‘miracle’ or two as well. But always, without fail, from someone who has absolute faith in their recovery. Let me tell you a story…

In the atrium of the new church in Magdala there are eight pillars. Seven are dedicated to the women followers and supporters of Jesus’ ministry, and the eighth is to all women of faith, of all religions. The pulpit of the beautiful church is a replica of one of the ancient fishing boats, and the backdrop a wall of glass – with a view of the Sea of Galilee behind it. Sitting there is stunning. It is impossible for most people to speak. Yet this is not the most powerful place inside the building which – in this birthplace of Mary Magdalene – has been dedicated to the dignity of women. 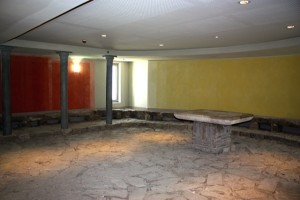 Downstairs in the basement is my favourite of all places on this trip. I grow excited with childlike nervousness as I approach, knowing how it makes me feel when I go in. The floor is actually part of the original stone of the first century marketplace of Magdala. (We now know it was a thriving port where local fishermen would gather and process their catch for export to Rome). A powerful energy presents itself as soon as we walk down the stairs. We all feel it.

And as I take my group into the Encounter chapel, one of the most mystically emotive spaces I have ever witnessed, we are all intuitively prompted to sit around the edges of the room, where stones have been placed to replicate the original Magdala synagogue. As we take in the colours and detail of a large fresco, a breathtakingly beautiful mural of the feet of Jesus and his disciples which fills the entire wall, it is difficult to know which aspect is more powerful: the sense of history of the stones beneath our feet, the reverence of being in such a sacred space, or the emotion depicted by the intricate detail in the mural. Reaching across the picture is the arm of the woman who had been bleeding for twelve years, and who believed that Jesus could heal her. As her fingers touched the threads of his robe he felt her presence. She was immediately healed. Cured because she knew she would be.

We sat in meditation with each of us empathically feeling the immense pain of all the suffering in the world.  Then standing in a circle, we held hands and prayed for all those women throughout the world who are suffering emotionally, spiritually, mentally or physically. Then we particularly prayed for the families of those affected by the terrorist attack in London which happened whilst we were away. We called for healing for all our own loved ones, and for all those friends and colleagues, and for any specific areas throughout the world, each of us saying names out loud into the circle. We sent the Light into the ether and sent a kiss around the circle.

As we left the chapel I was touched by how a group had respectfully waited outside until we completely our meditation and prayer. I honestly thought we were the last group to go in, and was surprised to see them waiting. As we left the room they thanked us, just for being there. Wow!

We were all moved by the whole Magdala experience and several of us felt the incredibly strong past life connections. (Last year I got the sense that one of our group would receive healing from severe grief, and she most certainly felt so much better after sitting in that space). After sailing across the Lake and sending out world peace from the centre as the Captain raised the British flag to half mast following the morning’s news of an attack in London it had been a very emotional day! Some have since described it as their personal highlight of the pilgrimage. It is certainly one of mine.

[Just in case you are unfamiliar with the New Testament story of the ‘encounter with the woman with the issue of blood’ here it is:

“When Jesus had again crossed over by boat to the other side of the lake, a large crowd gathered around him while he was by the lake and a woman was there who had been subject to bleeding for twelve years. She had suffered a great deal under the care of many doctors and had spent all she had, yet instead of getting better she grew worse. When she heard about Jesus, she came up behind him in the crowd and touched his cloak, because she thought, “If I just touch his clothes, I will be healed.”Immediately her bleeding stopped and she felt in her body that she was freed from her suffering.

At once Jesus realised that power had gone out from him. He turned around in the crowd and asked: “Who touched my clothes?

“You see the people crowding against you,”  his disciples answered, “and yet you can ask, ‘Who touched me?”

But Jesus kept looking around to see who had done it. Then the woman knowing what had happened to her, came and fell at his feet and, trembling with fear, told him her truth. He said to her “Daughter your faith has healed you. go in peace and be freed from your suffering.” Mark 5: 25-34 NIV]