So close and yet so far away… 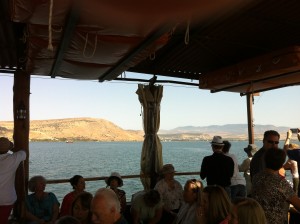 Do you ever have emotions or visions which you know most certainly have a connection with a past life? In my role as a celebrant and trustee within a group called the New Essenes I felt honoured and very privileged to be invited to take part on a Pilgrimage to the Holy Land. The pilgrims were all interested in the Essenes, believing themselves to have been around in Israel at the time of the Essenes, between 2-4000 years ago or beyond. We were all interested in what the group leader referred to as the Crystalline energy of these sacred lands. Meeting up with so many (92) people, from all over the world, many of whom had clear ‘memories’ of an Essene connection was extraordinary. So, with high energy, huge excitement, (and high expectations for some) a great deal of knowledge and experience amongst us, we arrived in Tyberius on the banks of Galilee for the first of many adventures.

We embarked for our sail across the Sea of Galilee (which as you probably know is actually a lake) on Thursday the 1st of May. The Captain stalled the engine and I briefly shared with the group that I found the synchronicity of it being Thursday, very important to the Essenes, and their communion with the Angel of Water, very profound. Certainly orchestrated by our celestial friends as a day of deep healing for us all. Because many of the group were healers I felt that we were being called together for some higher purpose.  The water on the lake was calm and we all stood in silent meditation, then, led by one of the group, and from within this living crystal bowl so high above sea level in the centre of the Holy Land, we sent deep spiritual healing from our hearts to one another, and to all corners of the world.

As the little boat continued our journey across the water I caught sight of a cluster of buildings and a village came into view on the far bank of the lake. My heart felt as though it would burst and tears began to flow. I felt overwhelmed by emotion, yet I had no idea why. Someone asked me if I was ok as I was noticeably trembling. I have experienced similar, and often related to a past life or an angelic presence.  I had no idea where we were other than on the Sea of Galilee in a tour boat, and although energies were high among the party of Pilgrims we were all very quiet and I couldn’t quite work out my sudden overwhelming emotional reaction. Then the guide announced that the village we were passing and could see in the distance was Magdala, the birth place of Mary Magdalene. Oh my word, my heart almost jumped from my body! I felt in every cell of my body that I have a connection to this place. As we sailed past I could feel my body sobbing. It was as if I yearned to ‘go home’ yet I have never been there in this lifetime. As I turned and looked around the group many of them were also in tears. How strange, yet not at all. In that moment I was determined to return. 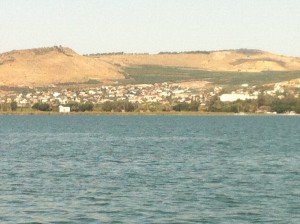 This is not the first time I have had a strong emotional reaction, extreme and beyond my control, in relation to Mary Magdalene. I have my own ‘inner’ explanation, and have been given several interpretations by mediums, as I’m sure you can imagine, but am curious to explore the feeling further. You can be sure that I have included Magdala on our tour schedule for the Spiritual Pilgrimage in Spring 2016.