Messages in the Stars

Over two thousand years ago a new star appeared in the sky in the east. It was a sign of a great new beginning and was seen by Magi. Persian wise men were masters of astronomy and astrology  in those ancient times. They worked out the significance of the brightest star in the heavens, and decided to investigate. The rest is history as they say.

Astrologers are not the only ones who see messages in the stars. How many of us have caught sight of a shooting star and decided it was a good omen? Or made a wish, or at the very least allowed it to lift our spirits? (I admit to all of those things). 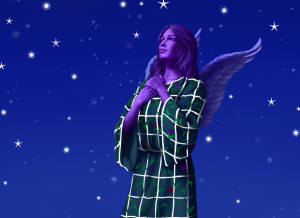 My father, Fred, often shared with me this story of one of his first mystical experiences from when he was in his early teens. He had been camping and as the evening was warm and dry he slept on the outside of his little one-man tent. As the stars appeared he lay on the grass and gazed up into the night sky. He could see the Milky Way clearly in the velvet black night and was already familiar with the constellations. Being keen on mathematics, physics and astronomy he had already become familiar and learned to decipher and understand the patterns and laws of the universe emerging through his studies. He always had a fascination with the mystery of creation.

As Fred meditated on the wonders of the world, and stared into the night sky, he was filled with awe as the stars slowly began to move together and form a large, bright shape in the sky above him. To his absolute amazement and wonder the stars had all come together in the sky above his head to make a picture. It was the face of Christ. That vision stayed with him for ever. Although Fred hadn’t quite worked out how and why, he knew , even in his youth, that this was hugely significant, but kept it as a secret for many years. He grew closer and closer over the years to the mystical teachings of Jesus (Jeshua) eventually becoming a mystic himself, and a powerful healer.

This morning at 04.45 I looked out of the sky-light and straight into the most beautiful clear sky. “Come and talk to me”, said God. “The world is yours and all those who share it. Just as you love your family, I love you. For every star there is a soul shining. As you look up into the night sky, I look at all of you – as you are filled with awe and wonder, so am I. Where you see light shining in the darkness, I see the same.”

It truly is a beautiful world. Shine on all you beautiful stars!