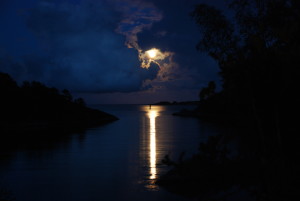 As I drove home late from babysitting earlier in the week I was amazed by the brilliance of the light from the mid December full moon. The journey involved twists and turns round tiny country lanes, many of which have overhanging branches from high bushes and trees, and some fairly treacherous blind bends. The lower dips in the road were filling with a swirling eery mist and as I was very tired I had to concentrate really hard. Yet it was almost as if my pathway was being illuminated by some big friendly giant holding a lantern in the starlit heavens to light my way home. An angel to guide my way. Beautiful.

I often speak about the various full or new moons, but for now I’m going to leave the astrologers to describe the meaning of this latest “Super Moon” –  the benefits and attributes – because I want to ponder about its most fascinating quality the moonlight. I wonder how many photographs have been framed, song writers have ‘waxed lyrical’ and poetic narratives penned in an attempt to capture the magic of the moon. Her beautiful, romantic natural light, the constant changing shape, and the powerful magnetism affecting our Earth with the flow and ebb or wax and wane of this strange satellite revolving round us. Influencing the high tides with a cyclical nature which has been associated with those of women’s bodies and closely related to the feminine nature within all of us.

For me, however, the most appealing and intriguing aspect of the moon is its light. Crisp clear and bright, on a clear midwinter evening is as magical as the bright summer’s night as she shines among the stars with a delicate cool aura which may change colour (according to science) depending on the gases emitted from Earth. So different from the hot bright golden life enhancing light of the sun. Yet the moonlight casts shadow too. Some would say that it is in the darkest hours – or by the light of the moon – that our real or hidden self is exposed.

As we illuminate this  ‘sleeping’ self hiding in the shadows we are able to sharpen our perceptions of the whole ‘me’ just as we focus our eyes in the darkness as the moon shines and shows us the way. And, because we know that moon is also associated to the Archangel Gabriel and the bringer of messages, hope and new birth we can tune in and ask for wisdom and guidance in working out whatever we find hidden in those shadows, why they have been left there, bringing them out, reflecting on them and looking at them with a new light and perhaps seeing them more clearly.

Light. We can’t live without it. What is Light? – energy, vibration, the source of everything in the universe, we need it to thrive, we measure speed by it, it’s a means of communication, and the medium by which we ‘see’ in both real and meta-physical senses. Since researching for my upcoming book (Seven Steps into the Angel Light – Autumn 2017) I’ve become fascinated by it. Our language expresses the importance of it in words like enlightenment and phrases such as seeing the light within a situation, or perhaps we might say we have just had a light-bulb moment when something is suddenly understood. I’ve purposefully used several of these phrases to illustrate my point. Yet I’ve learned that it is not only in our speech but through our cells that we share light. We have photons in every cell which communicate with one another – sharing their light to stay bright and healthy. Science has always been fascinated by it too, and  recent experiments in Japan have shown that even in darkness our body emits a light which can now be seen by camera equipment. (This is completely different from the Kirlian photography which picks up the infra red heat from our skin) Aha, so science has now found that the ‘aura’ of the human body exists. Hurrrah, they’ve finally seen the light!

I’ve enjoyed the excitement of the research so much so that I’ve developed a new and exciting workshop dedicated to our own healing, by understanding the enigma of …. you’ve guessed it Light!