Here’s Looking at you! 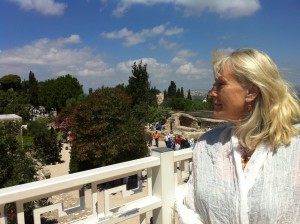 Some of the phenomenal experiences we have along our spiritual journey will remain in our heart and memory for ever. Sometimes one experience leaves a question, which may, in time, be resolved.

Let me share one of my most powerful experiences and you can see what you make of the outcome. (Let me know your theory, and has anything similar happened to you? I’m very interested)

When my son Daniel was very young he was diagnosed with Type 1 Diabetes, and I found an excellent complementary therapist in the City of London who specialised in acupuncture and Chinese Medicine for children. We developed a great rapport and trusting relationship with ‘Robin’ over a couple of years.

On one of our visits I was extremely stressed. I was working full-time with my then husband running our transport business in London’s east end. We had expanded into over-night parcel delivery but with the ongoing threat of terrorist attacks at that time, and a bomb on the city of London (our patch) we were under tremendous pressure. It didn’t help that I hated this and was very unhappy in my work.

Daniel and I arrived for his Acupuncture this particular day, but as soon as we walked into the treatment room Robin asked Daniel to go into the waiting room and play with all the toys. Taking one glance at me, and the stressed state I was in he announced that this time it was ‘Mummy’s turn’. Taking all my pulses (in Chinese medicine all the organs have their own pulse rate to measure) he observed that all my organs were under stress and that my spleen, liver, adrenal glands and kidneys were totally ‘wiped’. He carefully placed lots of fine needles over my body arms and legs and advised me not to move at all, just to lie still and try to relax whilst he went into another room and treated my son.

As soon as Robin left the room I closed my eyes. But far from relaxing, to my amazement, immediately behind my lids came a vision of a huge blue eye. I opened my eyes and there it was, staring right at me. Wherever I looked the eye was still there. It was bright, intense, and very definitely watching me closely. No matter where I looked it wouldn’t go away.

Suddenly the room filled with pairs of eyes, soft, large, small, narrow, brown, blue, dark, light, animals eyes, human eyes – everywhere!. All these eyes were looking at me. None of them were strange to me, but I couldn’t work out whether the one eye had split into many, or whether these were my own eyes from previous lives, or those eyes I had known before in some way. I had no idea, but they were not the least bit threatening. They were just looking at me. Just as they had arrived, they all faded away, but the one large eye remained, then slowly it went away too. 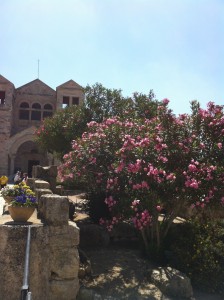 When Robin returned I tried to tell him what I had just seen but, I guess as he didn’t have any answers there was nothing he could say.

As soon as I got home I had to find out what this experience had meant. I asked the local vicar if he thought it was a mystical experience, but he couldn’t help. Then I found references to ‘The Eye’ in several books and scriptures. Fascinating. I felt for some reason ‘God’ was taking a closer look at what was going on, but I didn’t really know why, or what to do about it. The image printed itself indelibly in my brain. 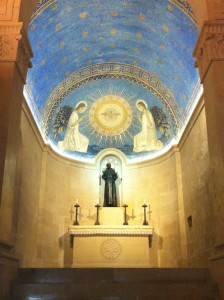 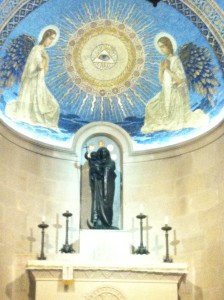 Twenty-five years later, in May 2014, along with 90 other seekers I finally fulfilled a long standing personal dream to visit the Holy Land and revisit the places I believed myself to have lived in at least one previous life. In particular I longed to visit Galilee. Our pilgrimage was hectic and we were transported from place to place, from one spiritual encounter and experience to another. And then I walked into the Church of Revelation/ Transfiguration on the rock at Mount Tabor, in south Galilee, Israel. Somehow I seemed to know this place. I’ve since researched it and been excited by my findings – from a personal past life perspective. (For example it is said to be the place where Jesus is said to have ‘risen up’ and shining as a light he is seen speaking with tone prophets Elijah and Moses).

There was a service going on in the crypt so we all split up and wandered silently around the church. I was enticed up a stone staircase by a mural of beautiful angels on the walls. Then I reached the top and looked up. Oh my goodness, there was the eye. As soon as my eyes focussed upon it I was overwhelmed by emotion. My heart almost burst and I suddenly fell to my knees, still staring at the image high on the wall. This was a picture of ‘the eye’ between two angels.

How do I describe the sense of knowing, of being called back to that place? Would anyone really understand if I told them?

Many years have gone by since those days in east London and I’m now doing a job which I believe is fulfilling my soul’s calling. Perhaps the eye came closer to check me out, to get a closer look at what on earth I was doing to myself at that time – and certainly not at all what I’d promised to do. Who knows? Anything similar happened to you?