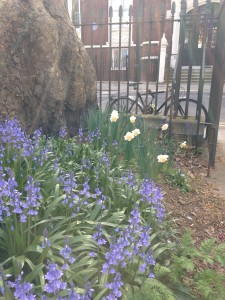 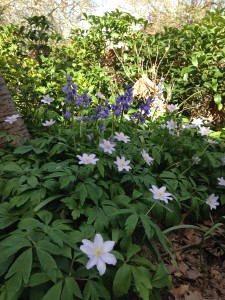 Yesterday I had two important meetings. One with my cousin whom I’ve only just got to know since my father passed away. And the second to discuss marketing with my publisher. I never go 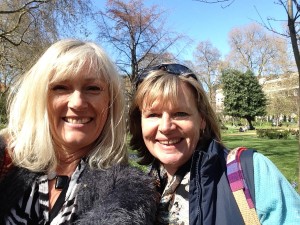 into London without trying to double up on reasons for being there and so I met up with my cousin for a lunchtime catchup en-route to my meeting with Watkins in ‘Angel’. [How interesting that’s where they should be. For those of you who don’t know London well, Angel Islington is just north of Kings Cross and Eust 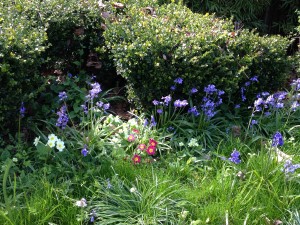 on in a busy area of the city. It has grown up around the Angel Inn whose history dates back to 1665 when this bustling area of town was once a rural area.]

Fancying a trip down memory lane I suggested we meet up in the gardens of Russell Square at a lovely Italian coffee bar just around the corner from where I went to University fifteen years ago. Thats where I would sit as a mature student and revise, or read my notes, among the trees and enjoy the seasons. It was great to be able to share a bit of my past with her.

We were graced with warm sunshine, and just as in my recollection of the enjoyable days at S.O.A.S, and later Birkbeck, the sun was shining through the trees, pigeons pecking around the tables, and graduates were wandering around in flowing gowns clearly waiting to make an appearance at a Masters Graduation Ceremony. What a blessing, my heart was dancing with delight. The fifteen or so years since I attended there have gone with the wind. So back again now and sharing one of my favourite places I had a great time hearing about family history and previously unknown secrets about my mysterious Russian ancestors.

But one of the greatest pleasures of the whole day came from cutting through a previously closed square behind the university, on the way back to Euston station. What a wonderful Oasis of nature. The square, with trees in blossom and students sitting on the grass, has now been opened to the public and is planted to woodland. I could have skipped with joy (probably should have) as I saw that it was magically strewn with Bluebells, wild Wood Anemones, and the last of the Daffodils and Narcissi. We could have been anywhere in the British Countryside – hardly anyone would believe this was central London.

For me this connection with flowers is so grounding, so perfect and so absolutely beautiful. After a couple of weekend events of powerful spiritual work, meeting and speaking to hundreds of new people, giving talks and angel readings, and driving several hundred miles … what could be better? What a wonderful and gracious gift. In amongst all the ‘BIG stuff’ in life both personally and collectively that we are called to give attention to, the greatest pleasures and the most magical gifts (certainly for me) are so often found in the form of a warm and loving human connection and the smallest of wild flowers.