This true story reminds me of the quote from Thomas Carlyle: “Music is well said to be the speech of angels”, and sometimes the most important messages come to us through the lyrics of a song. This is what my Dad, Fred, told me before he died, and he felt strongly that the message should be shared. 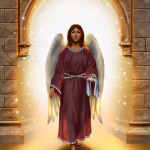 Fred had a strong connection to the angels. One night he opened his eyes to see a tall, masculine and very beautiful angel standing in the corner of the bedroom. He knew it wasn’t a dream, and neither was it the first time an angel had woken him from his sleep. He was being shown another of ‘his visions’. As he watched, a scene played out clearly of an ancient battle and he could hear the cries as he witnessed the bloodshed in front of his eyes like a hologram. This picture faded away and a few moments later a second scene appeared. This time he saw rows and rows of soldiers from the First World War. They were marching along, some limping badly, many covered in mud and others carrying their sick and wounded but all singing ‘It’s a long way to Tipperary, it’s a long way from home’. He knew intuitively that the ‘home’ they were singing about was Heaven.

Fred waited for the next vision. He had many visions and messages during his long life and he knew they always came in three so he became attentive.
Then came the third sequence with an eerie silence. He was shown a beautiful countryside, with fields, mountains, trees and grass, but the sky and the air all around him was copper-coloured; there was no sound, no birdsong or any sign of life. With a chill shudder down his spine he knew immediately that this was a picture of the future. Something had happened, and this was a world with no sign of life.

Tears rolled down Fred’s face, he didn’t need an explanation of this vision.

Then from the sky it started to snow. Exquisite patterned snowflakes, with light reflecting from each one of them, came raining down from the sky. But as looked at the snowflakes clearly, in awe of their beauty, in an instant he saw that they were not snowflakes but pieces of paper and miraculously he could read them all at once. They were pages from the Gospels of the Bible, and every piece of paper said the same words, a quotation from Jesus: “Love one another, as I have Loved you”.

At the same moment the most glorious voice, a strong tenor voice as clear and as beautiful as you would expect from an angel burst into song. The angel sang a song that Fred knew he had heard many times in his earlier years. This time the meaning of the whole vision came to him, hitting like an arrow through his heart as he listened carefully to the words of the old song: “ Ah, sweet mystery of life at last I’ve found you … ’tis love and love alone the world is seeking.’ The angel sang the song through, three times.

The angel’s message was aloud and clear, and it never really changes. We must all return to love, before it is too late. Love alone will save our world.