‘Join me’ on my birthday in Carcassonne

This coming weekend I’m being ‘whisked off’ to Carcassonne as a special birthday treat. I am really looking forward to it. (My lovely husband booked it for us because I thoroughly enjoyed reading the book, a historical novel, called The Labyrinth written by Kate Mosse, 2005, Orion books).

This is the first of a trilogy which swings back and forth between a modern archeological dig, and the early thirteenth century. Like many people I am interested in my past life connections and I love to allow my imagination the freedom to roam between ages. Having a very vivid imagination helps, and I can easily sit happily in either age. The book is about a young woman named Alice in modern times and Alais in the twelfth century and tells of the savage crusade against the religious group called Cathars, and becomes a very exciting and engaging read.

I have a great interest in the Gnostics and Cathars, and ‘know’ I have walked ‘the Labyrinth’ many times. One of the beliefs of the Cathars, was that human beings are angels, beautiful divine spirits trapped in a material body, created by the devil, and that only by pure living and many reincarnations can they be free. Another belief was the equality of men and women spiritually. They saw Mary Magdalene as one of the most important founding members of the Christian sect following the crucifixion, and interestingly many churches – including the church in my own village – are indeed named after her.

I have had many long conversations and read lots of research into the ‘marriage’ of Jesus and Mary Magdalene. I had considered the idea but had little knowledge of any great depth until I was invited to take part in a conference called “The Divine Feminine“. I was speaking about the balance between the Earthly Mother and the Heavenly Father, and their angels, within the teachings of the Essenes. The conference took place in London and Dublin where I listened avidly to the key note speaker, a wonderful author – who was impressively spiritual and academic – called Margaret Starbird. Some of you will already have heard of or read her seminal book called ‘The Woman with the Alabaster Jar’, in which she sets out to prove that there is more evidence in the New Testament of the Bible that Jesus and Mary (Magdalene) were man and wife, than there is to prove they were not.

I was equally fascinated when I met a lovely young woman at an Essene gathering who channelled the energy of Mary Magdalene, and who recognised me as a close friend whilst in trance! I have always held trance and channelling lightly, having had experience yet knowing only a little about it in the past,  whilst remaining open to the possibilities. Whilst channelling can be enormously inspiring – and I do know that I am often ‘in-spired’ by energies greater than me when I’m speaking publicly – I am very aware that all of us, even the very best of us, can have an agenda… and we all have an ego, which can if un-checked, run away with us. Yet I was intrigued. I have always known that I was there…. 2000 years ago…. but was I in the inner circle of Mary’s friends? Hm…. .

Now I shall have the opportunity to find out more about the Cathars and their beliefs, and how the energy of Carcassonne feels now…. One thing is for certain, there is a lot of healing work to be done. Many have been there and added their healing energy to the place. Now it is my turn to share some healing Light too. Even thinking about it in advance I can feel healing energy in my body building. 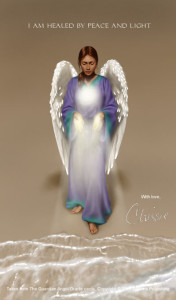 My intention is to act as a channel for the Light by inviting the healing energies of the angels to flow through me and using me as a vessel bringing down and embodying their healing energy of Christ consciousness – anchoring it  in order to release the pain –  within Carcassonne. Since 1209, when 20,000 innocents, healers, herbalists and devout Cathars were slaughtered as ‘Pagans’ -in this one area – because they would not conform to the  rulership of Catholicism, like many other places in the world the earth has carried that pain in it’s own memory.

If you get the chance, and have the inclination, perhaps you would like to join me at midday on Saturday 29th March – in your prayers and thoughts – as I walk the same streets . Together we can add Light and healing. I shall write again to let you all know how I feel afterwards…..

What a privilege …. Thank you…. I shall be sharing my birthday in the company of angels!