Are you a Channel of Peace? 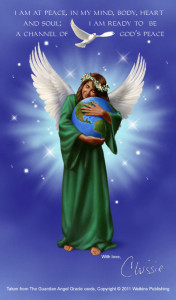 Are you a channel of God’s Peace? That might sound like a pretty weighty title, but just think about it for a moment. Do people often tell you they feel better when you are around? Does your presence very often create an atmosphere of calm. Are you generous of nature, bringing a shoulder to lean on, a ready ear to listen? Do you offer distant prayers, blessings and healing to the world having felt their pain empathically from afar? Then chances are you are one of the many ‘earth-angels’ working as emissaries of Peace throughout the world. Why not make a note of some of the many ‘little’ things you do, possibly without even thinking about it, that make life a little better for those around you? One of my favoured teaching tools is a journal. I always say to participants following a surprising coincidence to write it down. We so often forget things which may prove later to have great significance.

The first time I ever attended a spiritual retreat was in the late nineteen nineties. I was unhappy, stressed, and living in East London doing a job I hated. I was invited to go to a Summer Gathering of the Essene Network in the Midlands. This was a group I had never heard of before, but I had been persuaded to attend by my mother who was flying over from America to give a talk on Sacred Sites. It was there I was first introduced, over four days, to a loving healing energy, and the celebration of the Angel Communions of the Earthly Mother and Angels of the Heavenly Father. These ancient meditative prayers were offered every morning and evening. It felt very strange to me at first, yet it was there I felt such love and acceptance that it honestly gave me the courage and inspiration which later changed my life.

The following year I joined them again and arriving early I skipped off into grounds enjoying the countryside with my little dog, Barney, feeling happy and free. I literally started skipping like Dorothy and Toto on the Yellow Brick Road, in the Wizard of Oz! I flung my arms into the air with sheer delight and called to the Universe: “Thank you Thank you. I’m back. What would you like me to do now?”. Strangely, yet clearly, as if someone had pressed a button, I heard music in my head. I began humming the vaguely familiar tune as I made my way back to the others who were arriving and greeting one another. Then the words bubbled up from my memory. I was singing aloud by the time I walked up the drive to the large house. It was a Sunday School hymn I had known years ago but which had recently been made popular by the Irish singer Sinead O’Connor, “Make me a Channel of your Peace”. Oh my goodness. A lightbulb moment. “A channel for peace… me? Ha, I know nothing about politics!” I thought. As I entered the house the first person to greet me was one of the co-founders of the organisation, and I excitedly told her of my experience.

“Well that’s marvellous dear, you can come with me and help to carry and sell our Essene books at the Peace conference in Holland next May.”

Once inside everyone was busy making tea and greeting one another with hugs. An unfamiliar woman walked into the room and announced: “Where is Christine, is there a Christine here? ” I went over and introduced myself. “I have this book for you”, she said. “Its rather annoying actually as I was half way through it when a strong urge popped into my head with the instructions to give it to you.” It was a paper-back called “The Emmisary of Light” by James Twyman. I’d never heard of him, or the book at the time. In an effort to find out more I flipped the pages from the back only to immediately open it at the Prayer of Saint Francis, Make me a channel of your Peace. Cold shivers ran down my spine from top to toe.

Just as I was recovering from the ‘spookiness’ of this coincidence a lovely lady I had met the previous year came over with a huge smile and a gift in her hand. “This will impress you even more”, she said, and handed me a home-made gift of a bookmark pressed with little flowers. It had been embroidered beautifully with the words “Lord, make me a channel of thy Peace”.

These were only some of the many synchronistic experiences that guided my journey in the beginning. It’s only when I’m writing do I remember them. How I wish I’d kept a journal. Have a fabulous time writing yours!