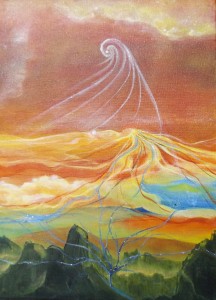 How amazing is this Autumn? You might be experiencing the presence of the ‘Angel of Water’ in your area, but we would all have to admit that it is exceptionally mild. I’m loving the colours, and for me as someone who follows the Essene communions with the angels I am constantly reminded of that magical connection between the energies of the Earthly Mother in all her glorious beauty – and the mysterious spiritual qualities influenced by the Cosmic energies of the Heavenly Father. I have been sent this beautiful picture, by artist Chris Keenan, to share with you, which illustrates that connection beautifully. (I am delighted to be offering a full day workshop on the 16th November at the College of Psychic Studies in London, where we can explore this connection together.)

As you know my work often introduces people to working with the Angels and Archangels in a very practical way, and as a teacher and facilitator I’m always delighted when people want to expand their knowledge and experience. Such as this great question, asked recently:
“I always thought that there were seven archangels. Now I have read that the Kabbalah has ten! How does that work?”

Confusing isn’t it? Yes, and the more you delve into the history of angels in the different religious literature you find even more groups of seven, ten, eleven and twelve! Archangels are like the ‘managers’ or team leaders of the angelic realms, and so of course there are many more than seven really. Let me try to unpick some of the differences for you…

The great ‘Seven’ archangels you will have most commonly heard of originate from the study of Theosophy and represent seven aspects of the Divine: Michael (power), Gabriel (annunciation), Raphael (healing), Uriel (peace), Chamuel (love), Zadkiel (transformation) and Jophiel (wisdom). The first four appear in the Jewish, Islamic and Christian scriptures.

Then there are another ten Archangels of the Kabbalah – or Tree of Life – which originally comes from secret Jewish practices called ‘the work of the chariot’ or Merkabah Mysticism, and goes back to the original visions of God and angels described by Ezekiel in the Bible. The word kabbalah means ‘receiving’ and refers to the spiritual knowledge gained from practicing the truths at each of the ten stages of the journey through the Kabbalah, offering a logical, holistic and harmonious system of spiritual development. some of these angels may be familiar, and others have slightly more unusual names.

For a clue to answering this question let’s look at the stages, The Ten Sephiroth, and each ‘sephirah’ with its angelic being, or Archangel, over-lighting and enhancing the energy of each stage. If imagine superimposing the kabbalah over a diagram of the human body you can see how they can be compared with the chakra system in a practical and understandable way, illustrating how all the great teachings inter-connect. 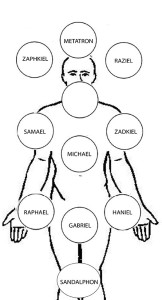 So, although each stage actually has a Hebrew name, I’m going to give you the Archangels instead (click the image to see a larger version). Starting at the top of the tree is Metatron, the highest ranking Archangel of all, representing the crown. Raziel (wisdom) and Zaphkiel (understanding) are next on either side of the head at the level of the third eye chakra. (At the throat there is another yet unmanifest sephirah which represents higher knowledge and the senses of sight, sound, smell and speech but does not have an angel). At the level of the heart are Samael (judgement) and Zadkiel (mercy). Michael (beauty) lies over the solar plexus and the seat of the emotions. Raphael (glory) and Haniel (eternity) and Gabriel (foundation) form a triad around the area which corresponds to the sacral chakra and Sandalphon (kingdom) represents the grounding energy of the feet and root chakra. The Archangels will help you to work through each stage, and eventually you may find the meaning of life!

[If you are interested in learning more about the Kabbalah I recommend: A Piatkus Guide ‘Kabbalah’ by Paul Roland, or if you like working with cards: The Angel Script, by Theolyn Cortens.]